In May 2020 Oracle has announced the planned end of Solaris 11.3 Premier Support with October 2020 and thus postponed the end of July 2020 mentioned last year.
With the release of Solaris 11.4 in September 2018, the main stream of development was shifted to the latest version and many features and bug fixes were developed exclusively for the 11.4 release. At that time, Oracle also announced that many older systems would no longer be supported on Solaris 11.4. This affected the following systems in particular:

– Mx000 SPARC Enterprise Server with SPARC64 VI, VII or VII+ CPUs
– All systems with UltraSPARC T1, T2, T2+ and T3 CPUs
– Many old SunFire / Oracle x86 servers of the Vx0z, X2xx00, X4xxx0 or the X6xx0 & X8xx0 blade modules
– And all Netra servers of the above mentioned series (NEBS certification and ETSI compliance)

Many of these SPARC servers are still running in the customer environment and Oracle has listened to the community’s outcry at that time and provided so-called LSUs (Limited Support Updates) for Solaris 11.3. With the seventh LSU (11.3.6.20.0 from April 14, 2020) a last LSU could be released until October. After that, it seems that there will be no more fixes for 11.3 and only the continuous release model of Solaris 11.4 will be invested in. Although Oracle supports in the maintenance contract in the sense of infinite “Sustaining Support”, they will not offer stability or security patches for 11.3.

As a result, a mandatory upgrade to Solaris 11.4 will only work as described above if the servers use at least Oracle SPARC T4 or SPARC64 X CPUs.

Many customers are very reluctant to upgrade to 11.4 because Oracle has included many new features in the fourth version. But meanwhile I can absolutely recommend the upgrade without a guilty conscience. Many of my customers have been stable on 11.4 for many months and appreciate the features and the usual stability of their Solaris environments. No matter if we talk about single servers or SuperCluster implementations.

To attach your ZFSSA using infiniband to an EXA for example you might want more than one "virtual" datalink on your HCA using multiple IB partitions with same pkey. It is (yet?) not possible to allow the use of the same pkey when creating two IB partitions (datalinks) that point to the same IB device using the BUI and the CLI property is hidden; don't know why; but I could find a workaround in: Oracle Support Document 2087231.1 (Guidelines When Using ZFS Storage in an Exadata Environment) https://support.oracle.com/epmos/faces/DocumentDisplay?id=2087231.1

In my example I will create a bunch of datalinks to enable an active-active IPMP failover configuration for both controllers. (you will have to start with ibpart1, "0" does not work)

Since Oracle JAVA like many other software is charged per core it might be more and more interesting where to get the most performance out per license… remember the announcement 3 years ago when Oracle brought their M8 SPARC chips – double JAVA performance than x86 and Power. Three years later that’s still true and proven by public SPEC benchmarks which show amazing results for M8 based servers. Compared to the latest and greatest x86 chips from Intel and AMD the latest SPARC chip still has 100% more capacity for jOPS and leads the critical jOPS per core! That would mean in a commercial point of view you would need double licenses for the same workload on other platforms. 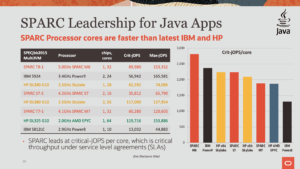 And don’t forget the incredible performance when it comes down to In-Memory analytics. When M8 was announced the chip provided 10x faster results using the build on DAX engines than any other vendor. I saw comparisons now a days still showing 8x faster queries than the rest on market. 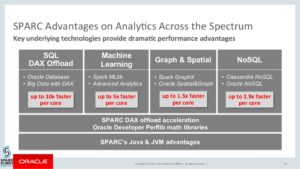 And in the end everyone talks about security but nearly no one encrypts their workload; most of the time because it ruins the critical performance. That’s not true on SPARC – encrypt all your business but only loose 2 to 4 % with end-to-end encryption and all performance features mentioned before. 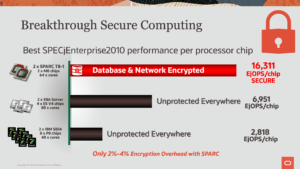 So, with Moore’s law you could get the performance which will show up probably in 2 to 4 years. But looking back to the last 10 years of Intel’s single core performance it grew by 10 to 15%, especially when it comes down to multi core environments where Intel’s chips lose their ability to increase turbo modes on specific cores. On modern Platinum chips they scale very well up to 14-16 cores but using 24 or even more cores you are thrown back to the performance you got 10 years ago with 2GHz… it’s still true, if you need enterprise class systems with a predictable performance and linear scale you have to go with enterprise CPUs like SPARC.
(or Power – did I really say that?)